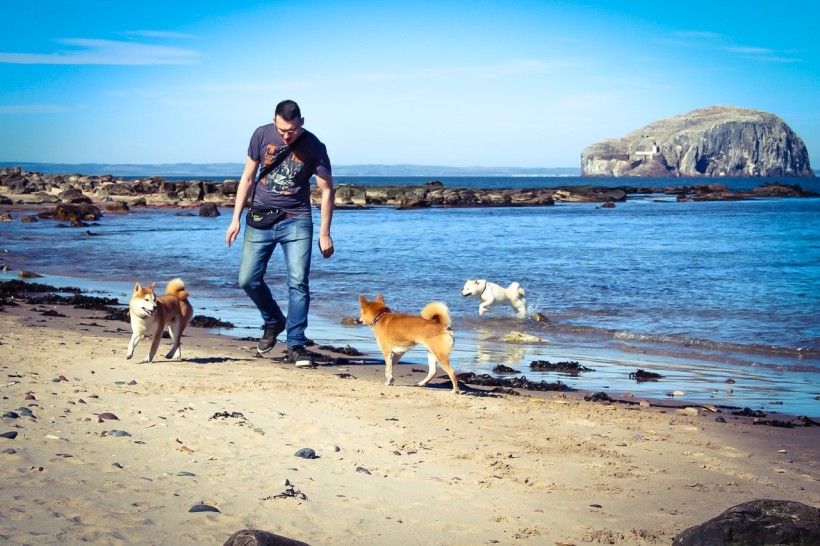 I was starting to get excited now, but I was also nervous about how the introductions would go.

We agreed to meet at a park in Glasgow; a neutral territory. I often talk to clients about adopting confident posture when handling their dogs, so I’m well aware of how that should look. But I can also empathise with them as it’s easier said than done! So this was my time to practice as I preach.

I entered the park and walked along the path, Oshi and Yuna by my side on their long lines. They were very relaxed, taking in the new environment. It was our first time here so lots for them to see, hear, sniff and for Yuna to roll in!

We turned a corner and there he was…this beautiful white Shiba. I was smitten immediately. I kept my distance and slowly made my way towards him, allowing Oshi and Yuna to decide if/when/how they wanted to interact.

I could feel myself tense up a little at this point and Jessie, also a trainer, noticed this immediately. “Drop the leads”, she said. I hesitated. This is not common practice or something I would recommend unless you are very fluent in reading dog body language and have a wealth of knowledge and experience in dog behaviour.

I made a calculated decision to drop the leads based on the information available to me from observing all three dogs. I was also ready to intervene if necessary.

Yuna said a quick, polite hello and decided to go about her own business and leave the boys to talk.

Within around 10 seconds, Oshi bowed and his high-set, sickle tail slowly began to wag. This is his “chase me, mate” display. I started to breathe again and the boys went off for a game of chase. I was thrilled.

The following hour and a half was filled with lots of lovely interactions between all three dogs, but particularly between Oshi and Samwell. The play was very balanced with lots of role reversal and frequent breaks. It was beautiful to watch and very “textbook”.

So, it was decided: Samwell would become a Whitelaw!

A question of ethics.

When we got home, he lay up on my bed and curled into a ball. I felt his ears and they were cold. His hair is so short and he has so little fat that he gets cold quickly so I wrapped him up in his blanket and let him sleep.

If it’s right that I supply the blanket when he’s cold, is it not right that I do what I can to make his training more comfortable too?

As some of you may know, I do Brazilian Jiu Jitsu as my sport (which is why my forearms are as awesomely powerful as they are!) (Joke! before the haters have a heart attack). We spar for the last 30 minutes of the class and we usually do 5 five minute rounds. I am always looking for more. “One more round!” is the battle cry. It’s not always a good idea. One more round when you are dog tired can lead to injury. Self knowledge is crucial. The less experienced players become more aroused, tempers can get frayed and people get hurt.

This brings me on to tonight’s arousal control session with Logan. His ability to control his arousal levels is the single biggest things which will change his life for the better. My suspicion is that beofre he came here there was plenty of going up and not enough coming down. When he is over aroused, he will pull on the lead like a train. He won’t let go of toys readily, moves frantically, snatches the toys from your hands and can’t listen when you ask him to do things. When he is really over aroused, it takes him an age to calm down.

Having said that, with the advice from several excellent trainers I can talk to about him, we are making huge in roads.

This evening, we played tug under control. It was the best he’d been. Loads of beautiful behaviours, letting go of the tug immediately when asked, accepting food and affection during the session, lowering his arousal levels quickly so we could engage in another round.

We did about 4 rounds of this over about 20 minutes. Tug-let go-move with me-tug-let go-accept food and petting and so on. All was well. Until I got a bit greedy and asked for one more round. Up he went. We did manage to get back to the house without (major) mishap so all good. I’ll stop at four rounds for the forseeable. Operant conditioning in action! 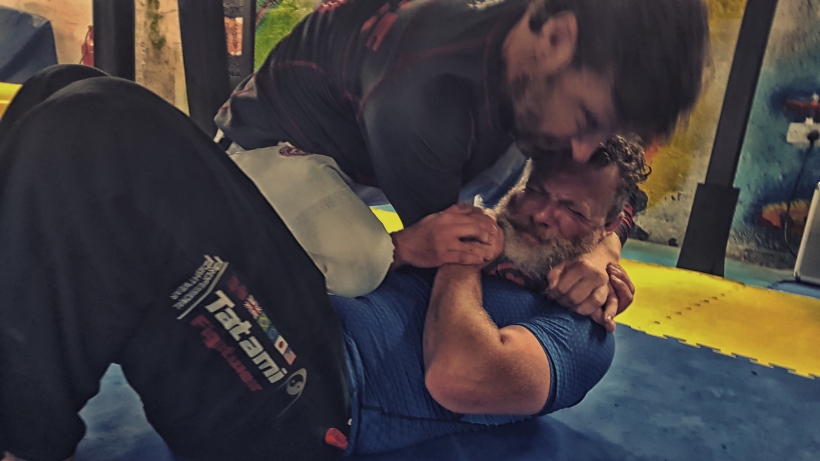 What is aversive to you?
Being physically controlled without having the ability to move?
Having a black belt’s full weight on you so you find it hard to breath?
Being choked like I am in the picture?
Having your neck cranked?
Having a grown man who is sweating heavily lie on top of you?
Having that sweat drip into your face, or worse, your mouth?
Having a sweaty armpit or groin in your face?
Having someone elses leg hair (I hope) in your mouth?
Being choked almost to the point of passing out?
All of these things happen regularly in the sport which I do as a hobby. I’ve experienced them all. I keep going back several times a week.
Would you subject yourself to this? Does any of this appeal to you?
This evening at class I got caught in a tight triangle choke (search for it on YouTube). I fought through it despite nearly passing out and was able to escape from it. The relief from the pressure was welcome but I’d rather not have been caught in it in the first place.
Is the application of pressure in dog training any different?
It’s up to each of us to decide what is pleasant and unpleasant.
Your dog gets to decide as well.
More to come.