DEEP THOUGHTS (not really)
As a dog training community, whether online or in person, we have a number of objectives and interests. We have to educate the public and our clients as best we can and provide them with information which they can actually use. There is most likely a way to stay away from scientific jargon without dumbing down the process of training and why we train without corrections.
Then we have discussions to make us better ourselves. By having a better understanding of the science of dog training, keeping up to date with new research which comes out, examining whether things we did 5, 10 or 15 years ago are still valid, needs updating or needs thrown in the bin and to build a tribe of like minded individuals who can we can have these discussions with. This is a big ask and each of us are better at some elements than others but other than a few truly unique individuals (Dr Susan Friedman), none of us are better that all of them than everyone else.
Sometimes the two objectives above are at odds with each other, and that’s ok, we can continue to improve until they are not.
I would much rather spend the time I have available online discussion how to get better at positive, effective, ethical training with my peers, so I can provide better content and better training than to debate whether we should still be using aversive training methods with others. There are other people out there who are more willing and better able to do that than me.
Terms and themes which I think need discussing
– the need for our dogs to sit for everything
– the need for our dogs to walk on the left hand side
– the use of the terms quadrants, impulse control, arousal, drive and a few others.
My journey with the spectacular dog in the photo has made me consider loads of stuff which I thought was gospel. This can only be a good thing. The need for discussion of the list above has been inspired by Logan and many other great human teachers who I have been honoured to have learned and continue to learn from. The list is only my opinion, it is no less or no more valid than anyone else’s.
I hope the picture of his nibs made you smile.
Peace and love.
May 16, 2019 glasgowdogtrainerLeave a comment
May 7, 2019 glasgowdogtrainerLeave a comment 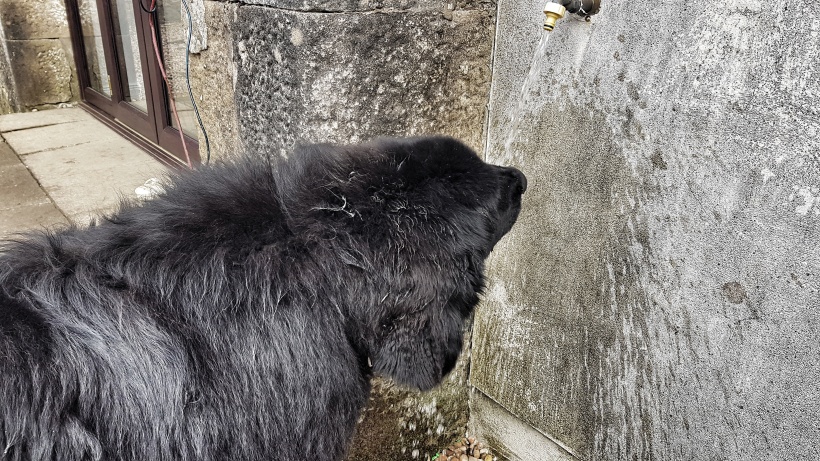 The first picture is from yesterday, working with Odin the Newfoundland. After our training session he was thirsty and needed a drink of water. He moved towards the tap and started licking the spout, Amy turned the tap on and he had a drink. This could not have been more obvious, he had a physical need.

In the second picture, from a workshop I did a couple of years ago in Mallorca, I was working with a young Belgian Shepherd. We were working on him showing more acceptable (to humans) behaviour in the presence of other dogs. In this picture, he is jumping up at me, looking for support and reassurance, which I provided. This was similar to a dog who I worked with yesterday who would disengage from the other dog and jump on his human.

The conventional thinking in the second case would be to turn your back/ignore/reprimand the dog for jumping. In both cases, the dogs were seeking to access reinforcement, both for a need they had, Odin for water to quench his thirst, the Shepherd for a more emotional/psychological need. If our dog had learned to jump on us because they needed a drink would we ignore that? Would we ever ignore Odin for going to the tap and asking for a drink?

Our dogs’ emotional and psychological needs are as important as their physical ones. They rely on getting them all met for optimal health and a happy life. It’s up to us to learn what they are asking, and to recognise their needs based on the situations they find themselves in. Listen to the subtle sounds, so they don’t need to make more noise.